LFT: LIVE BEYOND YOUR DREAMS

What is basketball iq?

As athletes begin to mature and get older some will begin to separate themselves from the pack physically and mentally.  The players who separate themselves from the rest mentally have increased their Basketball IQ.  Basketball IQ is knowing and understanding the mental aspect of the game of basketball and being able to execute "the reads" correctly during the game.  This is not a skill that will show up on the stat sheet, but will determine wins and losses.  Intelligent players will understand what the offense as well as defense is trying to do, and will be steps ahead of the game.  Players acquire this intelligence by studying the game of basketball, game film, their own game, their opponents game and most importantly through experience.  These players will manipulate weaknesses and strength and uses them to their advantage by using their instincts (game awareness) and executing or adapting as the game progresses.
Characteristics of an Athlete with a High Sports IQ

• Chooses the best option in less time
• Looks for the best solution by prioritizing alternatives, calculates the risk inherent to each and maintains focus
until he makes the right decision
• Knows the right play to make at any moment of the game relative to the time and score
• Never rushes and always feels secure and confident when making a move
• Uses his eyes to see the entire court and always appears to have time to make a play
• Balances taking risks and making the easy play
• Adapts to ever-changing situations
• Knows when and where to pass and when it is better to attack with the dribble
• Possesses good spatial awareness – correctly assesses the distance between he and a teammate or defender
• Keeps the game simple
• Knows what he is going to do with the ball before he receives it
• Uses his creativity for the team’s benefit
• Knows how to play the game, especially away from the ball
The “Sports Cognition Framework” describes three elements needed for sports success:

1. Decision-Making Ability (Mental): knowing what to do & when to do it.
2. Motor Skill Efficiency (Physical): being physically able to do it.
3. Mental Stamina (How well your mental and physical work together): being motivated, confident while executing the job given to you despite your feelings, situation, and surroundings.

Developing Basketball Intelligence focuses on the first element, the decision-making skills.  To execute the skills, players need the ability and the confidence and motivation; the following outline contributes to the development of technical skills, confidence and motivation. However, the primary focus is the elusive decision-making skills which often separate the elite performers from the average players. This does not dismiss the importance of ability, confidence or motivation, as the three elements work together in sports performance. 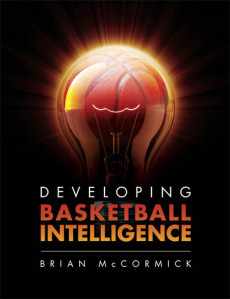 He/She:
• Reads the game and understands what is happening;
• Anticipates how the play is likely to develop based on processing the given information;
• Draws on past experiences when confronting a given situation and makes the correct decision;
• Executes quickly with an appropriate skill level (Wein).
Answers to Quiz